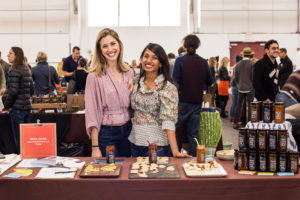 The Good Food Foundation exists to celebrate, connect, empower and leverage the passionate and engaged, yet often overlooked, players in the food system who are driving towards tasty, authentic and responsible food in order to humanize and reform our American food culture.

Through five key programs – Awards, Guild, Alliance, Mercantile and Fund– we build widespread support for the growers, ranchers, makers and merchants stubbornly swimming upstream to create and share the kind of food we all want to eat: tasty, authentic and responsible.

In 2008, Sarah Weiner and Dominic Phillips worked together to produce Slow Food Nation, bringing together 85,000 people to celebrate good, clean and fair food at North America’s largest ever sustainable food event. Inspired to continue the conversation, community, and collaborations it seeded, they started Seedlings Projects in 2010, a not for profit ‘do tank’ for the food movement, transforming ideas into action. Seedlings Projects launched two flagship programs its first year, one on each coast.

Farm to Desk in Washington, D.C., was the first integrated garden, classroom and cafeteria program in a public school in our capital city, with food topics woven into core subject curriculum. The concepts and lessons were shared widely to other schools all around the city where they continue to flourish.

The other projects, the Good Food Awards, was anchored with an annual event in San Francisco and quickly grew to include over 2,000 entries from all fifty states. In the first few years, the small and nimble team collaborated with the world’s top leaders around to launch projects including The Future of Food Conference with H.R.H Prince Charles of Wales and the True Cost of Food with the Sustainable Food Trust at Lucas Ranch.

In 2016, Seedling Projects officially changed its name to the Good Food Foundation to better align with the four core programs it now focuses on, honoring, celebrating and empowering these often underserved players in the food system.